The world is becoming more centralized, increasingly focused on economies of scale and transferring wealth to a tiny elite at the top of the financial system.

Yet, at the same time there is another movement that is actively working to decentralize the world.

The 21 decentralizing technologies and innovations in this list are all related to food, energy, water, shelter and waste and they are not designed to disconnect you from mankind, but rather, they integrate deeply with families, communities, societies, and all humans; in a bottom-up process rather than a centralized top-down structure.

Many of these technologies are open-source, some are high-tech and others are low-tech and low-cost solutions.

This list is far from exhaustive, in fact, the reader will discover that each of the technologies on this list is just the tip of a larger network of innovations. Thanks to the information available on the internet, the prospects of self-reliance has never been more real, and more achievable. 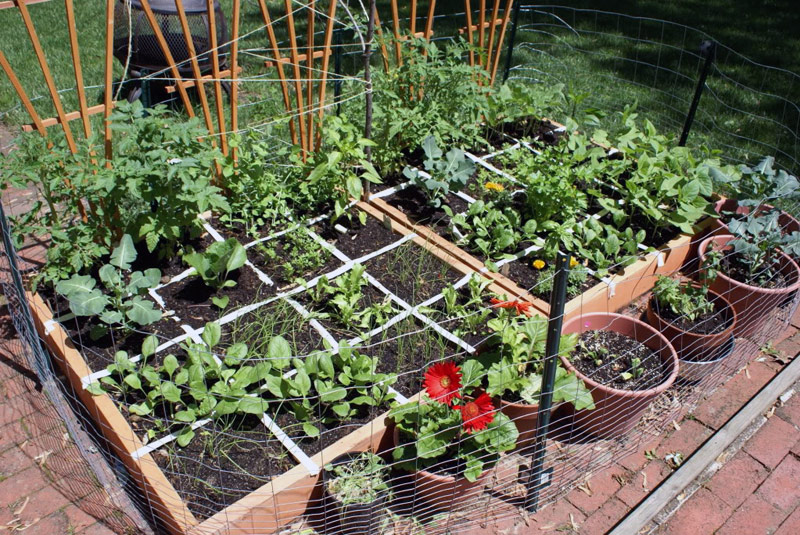 Planting crops in rows has a long tradition, but the paradigm is being challenged. It has been discovered that by planting in two-dimensional patterns allows for more plant growth in small spaces without crowding the plants. It is a simple concept but has powerful implications. By increasing the effectiveness of growing space: cost, time, water, and labor is decreased while increasing production. All of this is accomplished without chemicals. The best known founder is Mel Bartholomew and his book Square Foot Gardening. 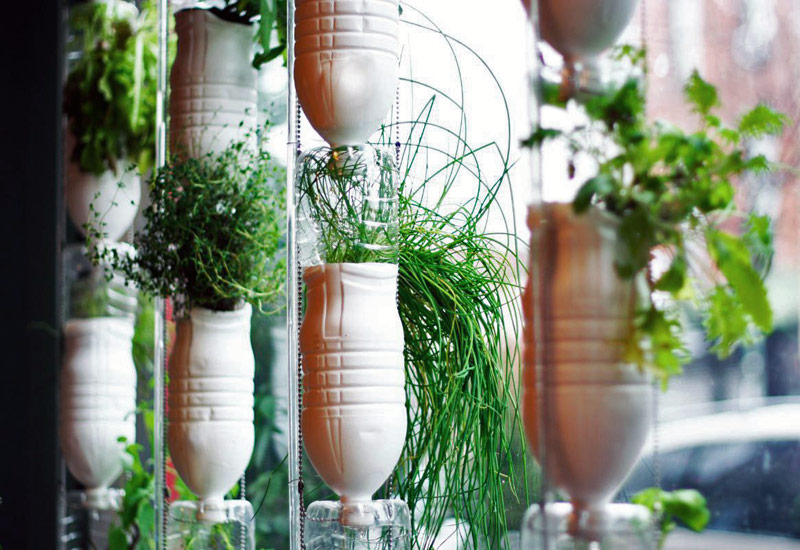 A third of the world’s population lives in dense urban environments with no access to soil, yet, inspirational individuals have created window farms. This open source and do-it-yourself movement can add food to your plate and living spaces. The ways to adapt this technology are limitless and there is strong community support behind the project.

Getting foods to urban areas is a problem that many are trying to tackle, yet it is a serious issue. Most cities only have food reserves of less than four days. Plantagon is a concept to bring high-intensity farms into the city without a giant eyesore. 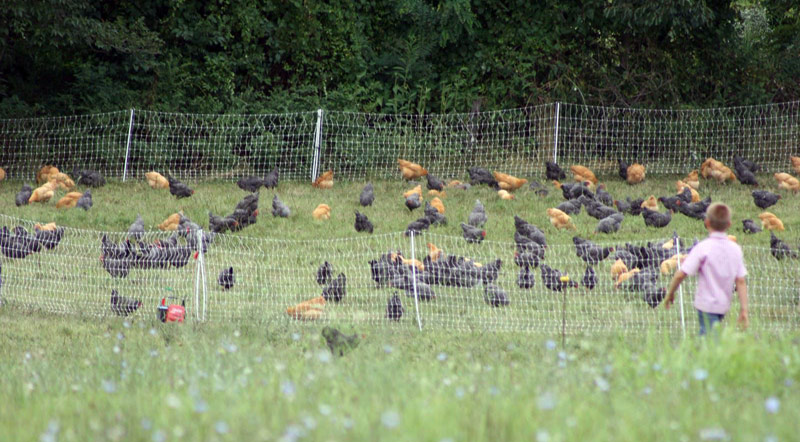 This is not a single technology but rather the gathering of many pasture based management practices and new technologies. Polyface Farm, run by Joel Salatin and crew, utilizes high-tech electric fences to mimic the natural grazing habits of animals that are impossible to replicate with full-time animal herders. The fences promote native grass growth and limit weeds. Plus, the cost is affordable compared to traditional barb-wire fences. These animals often get all their nutrition from the pasture, eliminating the need to sell to feedlots.

Cold frames and hoop houses solve the problem of how to grow food in the winter without the expense of a greenhouse. Greenhouse plastic mixed with bootstrapping can yield a solar heated environment that keeps frost-hardy plants healthy even in extreme climates. 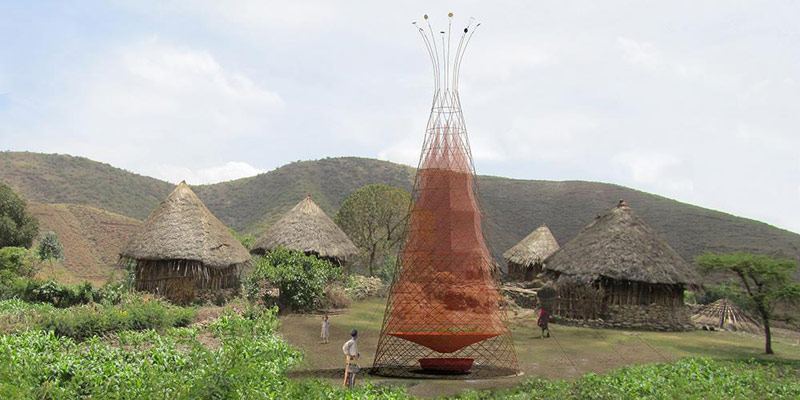 Water is the essence of life, and that is very true in arid climates. The Warka Water project, aims to utilize a simple net within simple structures to collect water. Not only is the technology easy to use, it can utilize local building supplies and construction skills to collect safe drinking water.

Band-saw technology has existed for several decades but has become increasingly popular over the past five years. It allows for trees to be turned into quality lumber without a large investment. A single person can operate the mill and the equipment is easy to maintain. Small mills allow for environmental improvement to forests and a source of affordable lumber to those willing to roll up their sleeves and get to work. 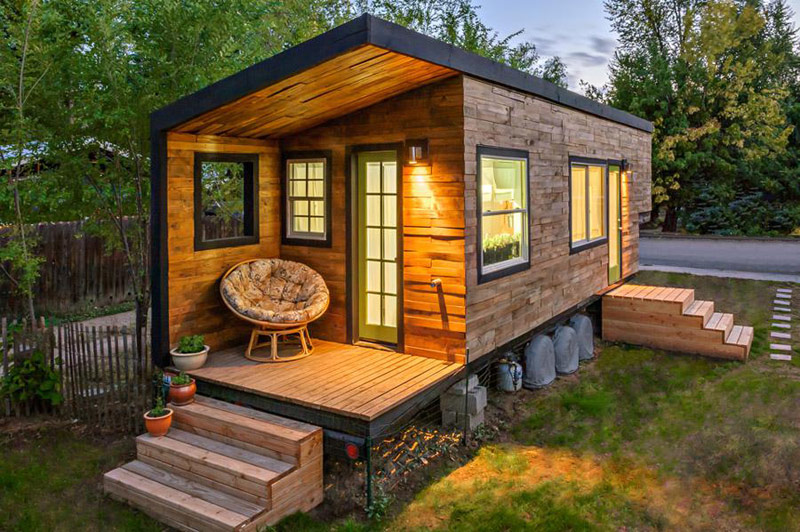 Many people are not interested in a large house, a lifelong mortgage and all the hassle associated with it, yet still want modern conveniences. The tiny house movement is a reaction to complicated structures and enormous “McMansions”, and tiny houses generally utilize the newest insulation, windows and small-scale heating to create open, yet efficient houses that are often built on trailers for easy movement. 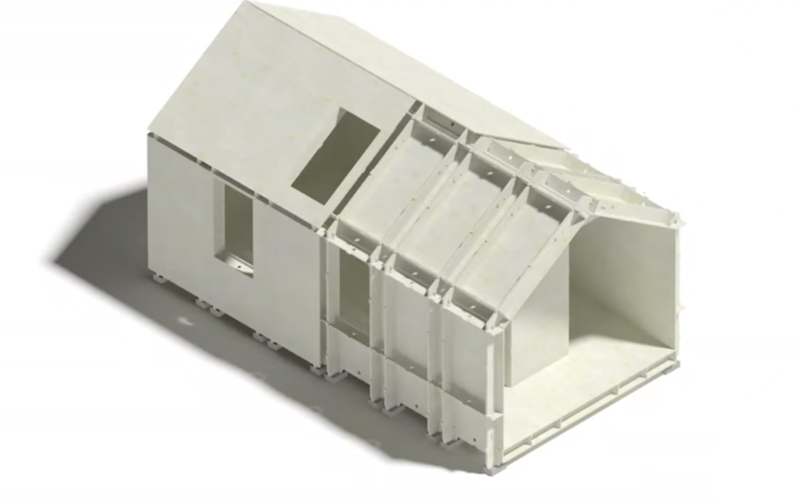 WikiHouse is an open source construction set, and the aim is to allow anyone to design, develop, and ‘print’ CNC-milled houses and components, which can be assembled with minimal formal skill or training. 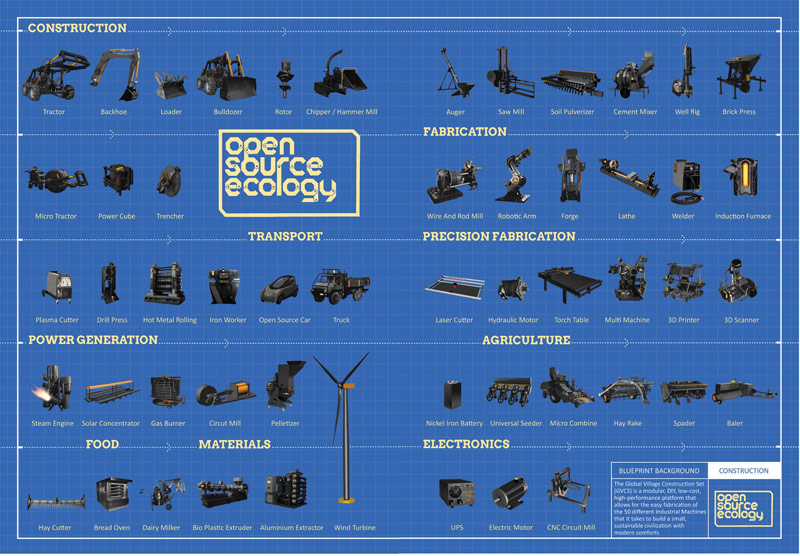 The Global Village Construction set is a truly inspiring and unique approach to decentralization for communities. Tools are the foundation to modern construction and Open Source Ecology aims to produce 40 of the most useful tools, such as tractors, and make it possible to construct them in a simple workshop. They include all the open source plans and materials while boasting to be 1/8th less expensive than industrial equivalents.

11. Harvesting Rainwater From Your Roof 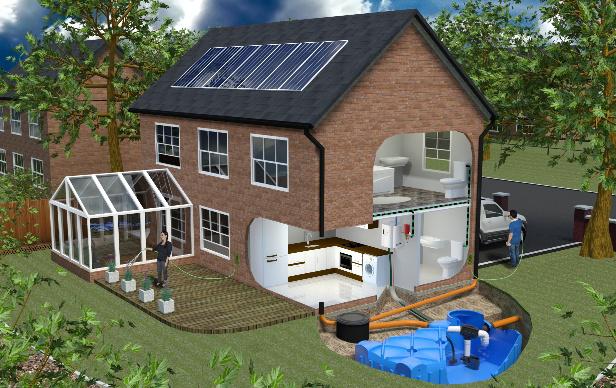 Thomas Jefferson designed his house at Monticello to be sufficient, starting with the collection of rainwater, diverting the water into cisterns below the ground to irrigate the surrounding food and flower gardens. Monticello was self-sufficient in many regards. New roofing systems are free of toxic materials have become popular and allow for self-sufficient water usage. 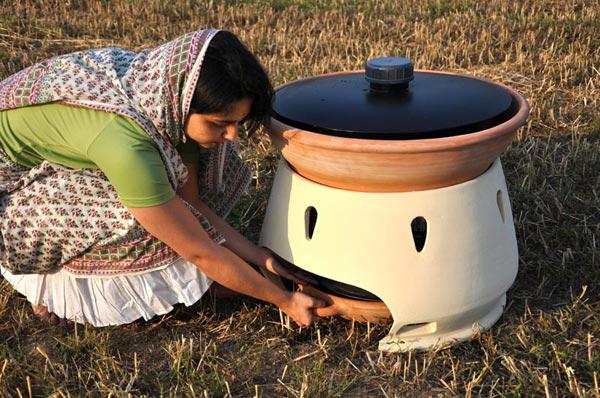 Planet Earth is mostly water, yet, most of it is saltwater and not useable for human consumption. That is why this open-source water distiller was designed. It allows saltwater to be desalinated with only sunlight. The simplicity of this design is what makes it powerful. 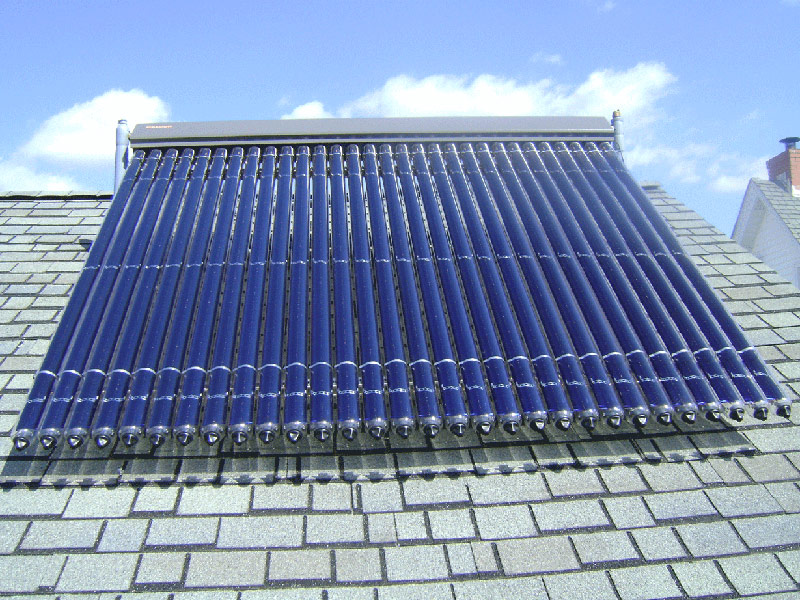 Water is a great medium of heat transfer and has been used for hundreds of years to power industry. With many advances in solar technology and the simple microchip, water can be heated directly by the sun to create hot water for radiant floor heating or hot water for the shower. No need to pay an electricity company. 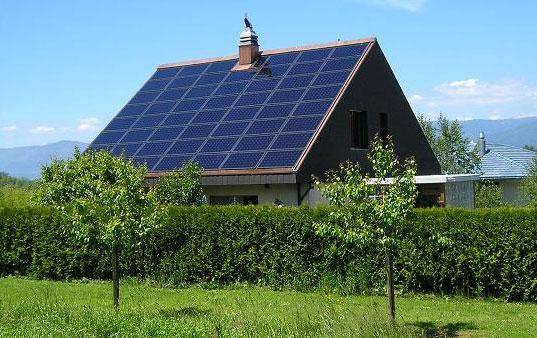 Solar has been around for a while, but it is still powerful and captures the imagination of people across the world. Power from the sun that shines so relentlessly on the surface of the Earth. Although, solar poses challenges to large electric grids (sun does not shine at night) it is great for individuals and decentralized grids. 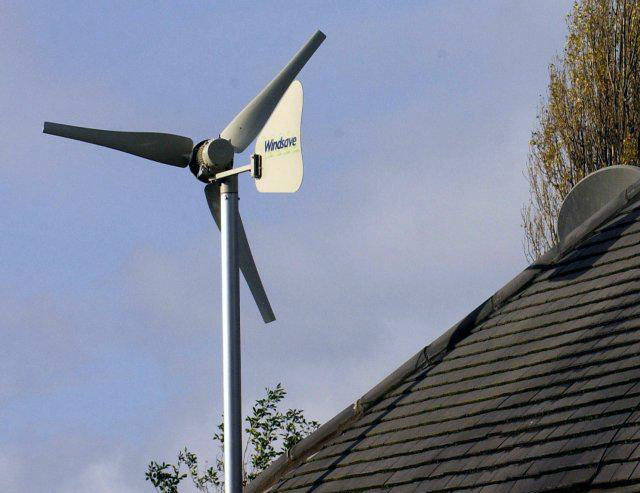 Wind power generation is not just for big projects, it is easy to implement for individuals. Small wind turbines are affordable, easy to install and supplement solar, in fact, the two power-sources work well in tandem. When the sun is not shinning, there is a good chance a wind is blowing due to the atmospheric disturbance that is causing clouds to cover the sky. Plus, two power sources are better than one. 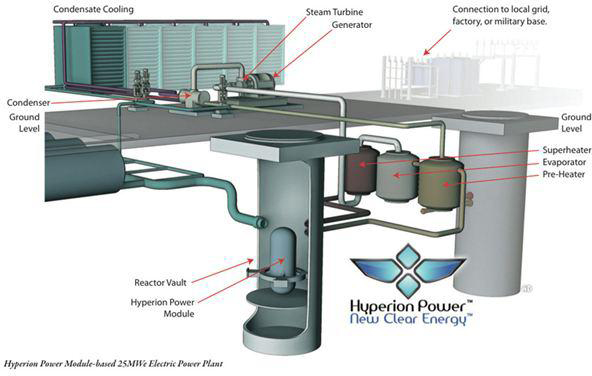 Nuclear gets a bad wrap, because it is dangerous when it explodes. But strip mining for coal is also dangerous. A solution proposed by start-up technologies is to utilize reactors of small size, the smaller the reactor the easier it is to protect in case of problems; unlike the large reactor in Japan. The saying goes, small is beautiful, but small is also safer. Small reactors can power towns and emit no greenhouse gases, plus the size of the reactor limits damage in case of a meltdown. Decentralizing small reactors would be a positive move for a more robust grid and stopping climate change. 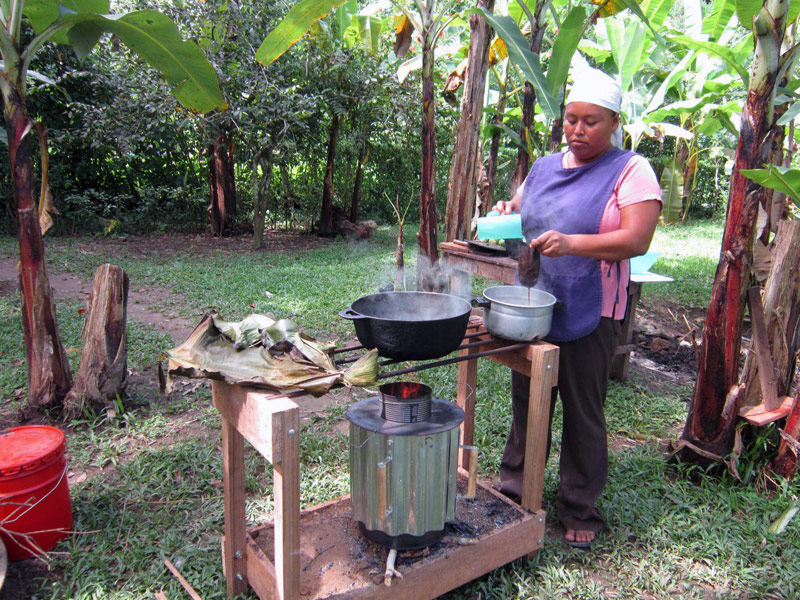 Around half of the world’s population heats and cooks with wood stoves, and these stoves are crude, producing smoke that damages the lungs of people over-time. Bio-Char Stoves allow people to cook with a hotter, cleaner heat due to an afterburner feature that reuses much of the gasses of a fire. After the fire is finished, a charcoal is leftover that is a perfect soil amendment for fields. 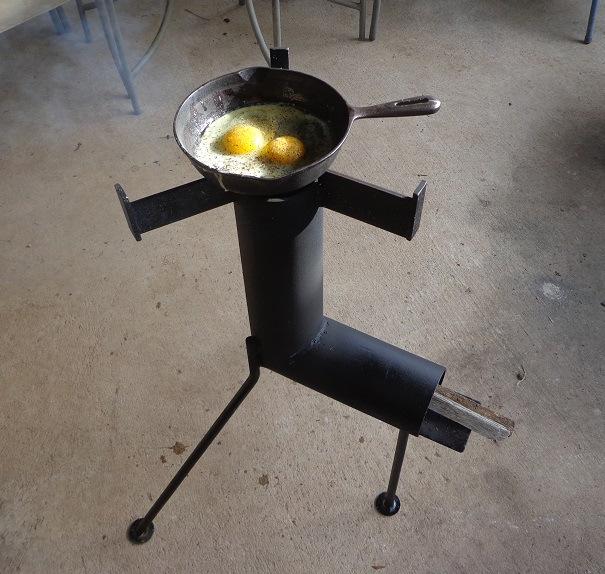 Fireplaces are nice, but they do not use small diameter pieces of wood to heat an entire house or cook a meal. Rocket stoves allow for a fire to fully combust an entire fuel source and create an impressive amount of heat in the process. By completely consuming the fuel, there is little smoke and rocket stoves can be easily used for cooking. 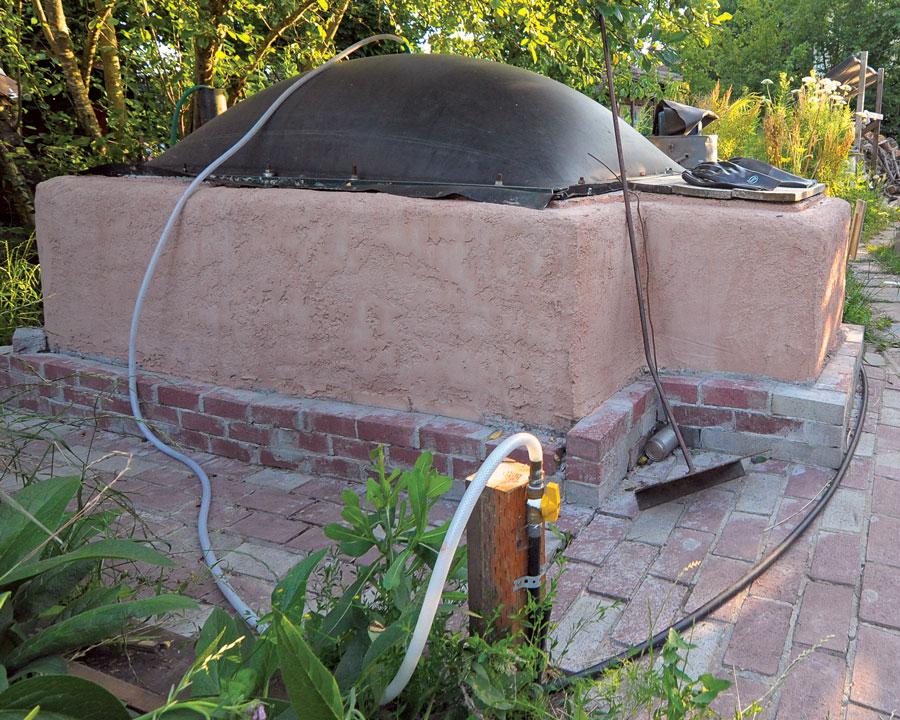 Biogas can be created in the back yard and produce enough gas to power a stove for cooking. Thanks to simple concepts and open-source technology more people are harnessing natural gas rather than buying propane in tanks. The uses of biogas are endless but creating energy from waste products can help whole communities pull the plug on imports of fuel for home use.

We do not often like to think about it, but we humans do produce waste – and that waste can be used for gas. Using a composting toilet system with a biodigester and a gas-collector, human waste can help heat a house and run a hot water heater. By using a resource that is flushed away, that waste can lower payments to energy companies. 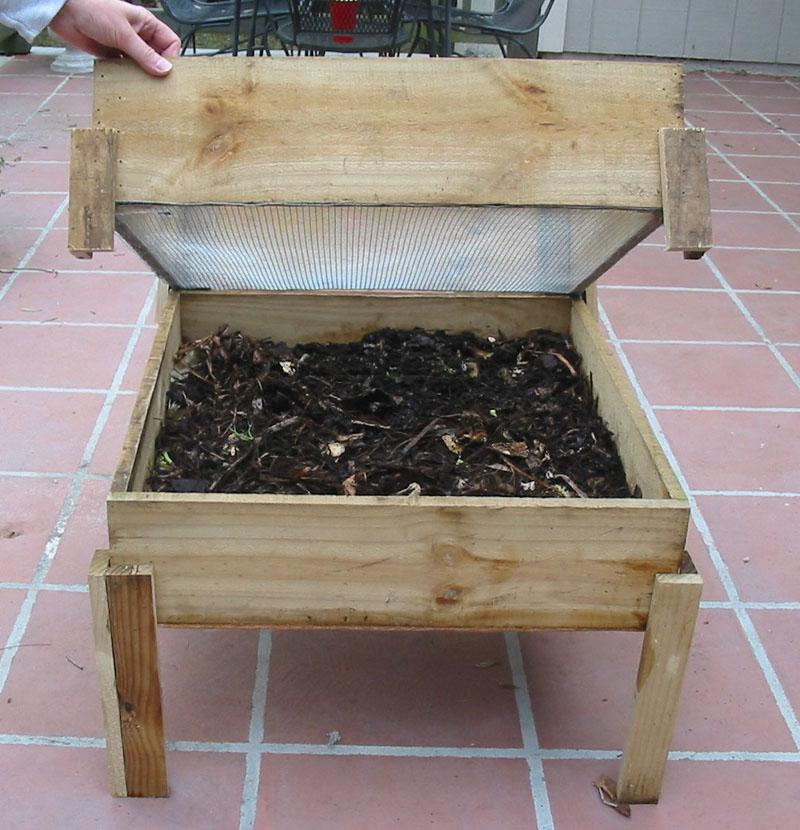 Its always better to have animals do hard work for us, they do not require minimum wage and they work much harder than humans. Worms are no exception. Red worms and vermiculture take care of waste and produce the best soil for plants, without creating a compost bin. Red worm bins can be stored under the kitchen sink and since the worms are so effective there is no smell from the waste you throw away.

So that’s it, 21 technologies for decentralization. These are far from the only ones though. Let me know in the comments below if you think some innovation or technology should be on the list!